These photographs were taken at Klepsk (Klemzig) and Okunin (Langmeil) in Poland. Klepsk (Klemzig) is the nearest village to Okunin (Langmeil), which is, according to the authors of the Schilling book, the place from whence our Schilling ancestors Johan Gottfried Schilling and Anna Rosina nee Lange and their children came to Australia. The town still shows some signs of its German heritage. The war memorial from WW1 has been pushed over, although the stones and their engraved names are still visible. The church is the most noticeable landmark, visible from the train from Poznan (Posen). 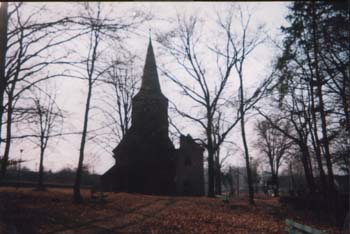 Klepsk: (Poland) church from the graveyard end.
The graveyard has been destroyed although some stones remain among the grass or have been lined up against the church wall. The church is surrounded by a low brick wall. 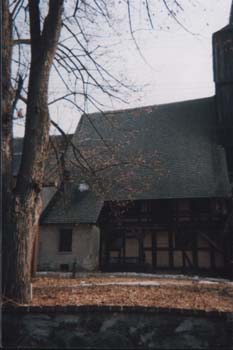 Klepsk: Church
Showing the 16thC half timbered walls. Notice the gravestone leaning against the wall. The foundation stone is still intact. 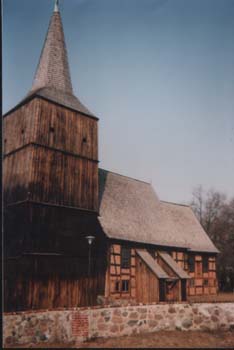 Klepsk: Church
General view compiled from several photos. It is interesting to compare these photos with the two pictures of the Langmeil church in the Schilling book 2nd edition. The building depicted there is a rendered church. The interior is very similar to the interior of the church depicted above. As far as I could determine there was no church at Langmeil, however a pre-WW2 map suggests there was one. 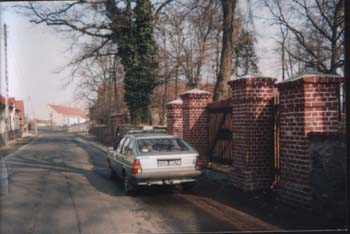 Klepsk: Street outside church
The car was our taxi. The taxi driver spoke no English, we spoke no Polish and our German is almost nonexistent. Next trip will be different. 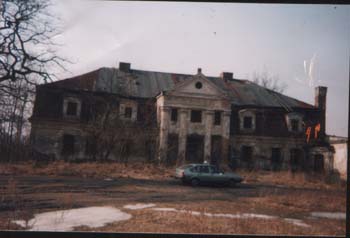 Okunin manor house
Now derelict, this house forms part of a quadrangle one side of which is an old stables, another is
a long barn which is seen on the right of the picture. The two storey building, of which we can only see the end, is a block of flats where the farmers live. 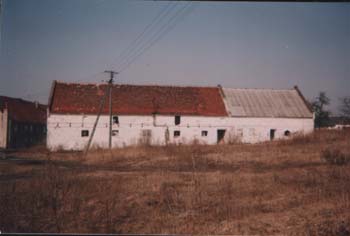 Okunin manor house barn
This is the barn opposite the house and forms the other side of the quadrangle, one side of which is an old stables.

This the old stables. These building appear to predate the last great war, and were part of the manor when the area was part of Brandenburg. I assume there were ideological reasons for not restoring the manor house and the stables, but the buildings seem wasted and a reminder of the German past of the area. 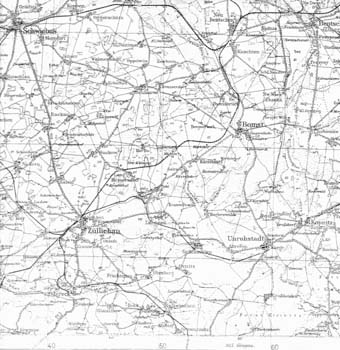 A bad scan of a 19th century map of the area. It is difficult to see many features on the map. The manor house is not specially marked. The village structure appears to no longer exist.

Back to Home page